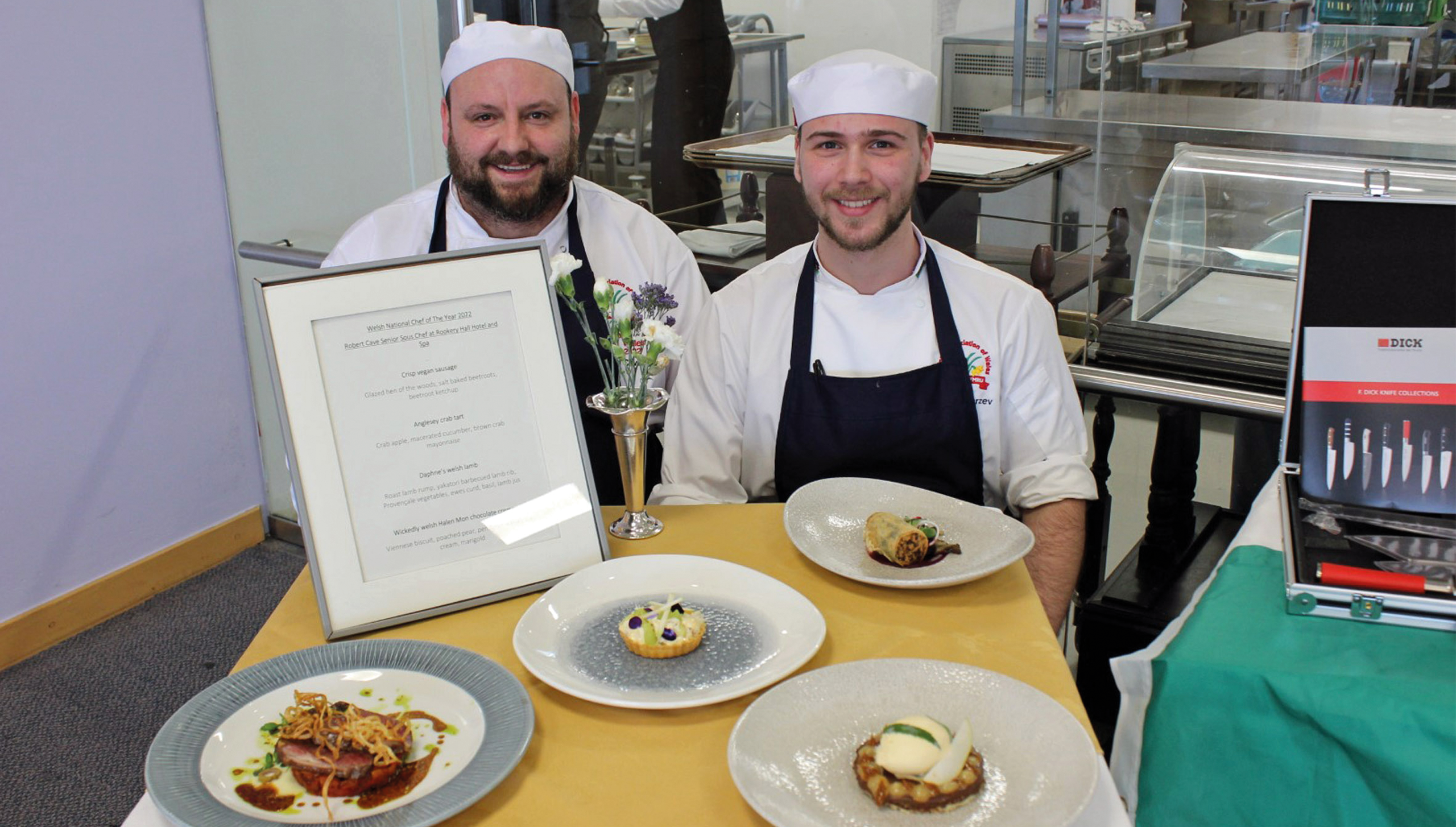 Two chefs set a high standard on the first day of the National Chef of Wales final at the Welsh International Culinary Championships (WICC) today (Tuesday).

First into the kitchen in the final, which continues tomorrow at Grŵp Llandrillo Menai’s campus in Rhos-on-Sea, were Andrew Tabberner, 29, chef co-owner of Gaerwen Arms, Gaerwen, Anglesey and Robert Cave, 38, from Wrexham, senior sous chef at Rookery Hall, Worleston, Nantwich.

Tabberner, whose comms chefs was Ollie Thompson, is bidding to complete a notable double, having won the Junior Chef of Wales title in 2015 while Cave was making his competition debut.

The winner will be announced at the WICC Presentation Dinner at the Imperial Hotel, Llandudno on Thursday evening. At stake is £1,000 for the winner, £500 for the runner-up and £300 for third place.

The winner will also have the opportunity to represent Wales at the next Worldchefs Global Chefs Challenge Northern Europe heat and will receive a set of knives from Friedr Dick and £250 worth of Churchill products.

The WICC are organised by the Culinary Association of Wales (CAW) and main sponsor is Food and Drink Wales, the Welsh Assembly Government’s department representing the food and drink industry.

The National Chef of Wales finalists have five hours to prepare and cook their own four course menu for 12 people, featuring mostly Welsh ingredients. A vegan starter is followed by a fish dish, a main course using two different cuts of Welsh Lamb and a dessert featuring seasonal fruits, ice cream, chocolate and biscuit or tuille.

For the first time at the WICC, invited guests and sponsors have a chance to taste the finalists’ dishes.

Confessing to feeling nervous on his return to competition, Tabberner said: “I was really happy with my dishes, which was an improvement on the last time I competed in final.

“Ollie and I both really enjoyed it and it would be a great privilege to represent Wales at the Global Chefs Challenge if I win the title.”

Cave said: “Everything went to plan. I was very happy overall with my dishes and loved the pressure of the kitchen.”

Gray, CAW vice president, said the first two finalists had set a high standard with their dishes. “We have upped the ante this year, with 12 covers and four courses,  but the reaction from both chefs was very positive,” he added.

“They liked the change of format because it was more closely related to what they do at work. They produced some really good dishes which was pleasing and it was a team effort with their commis chefs.”