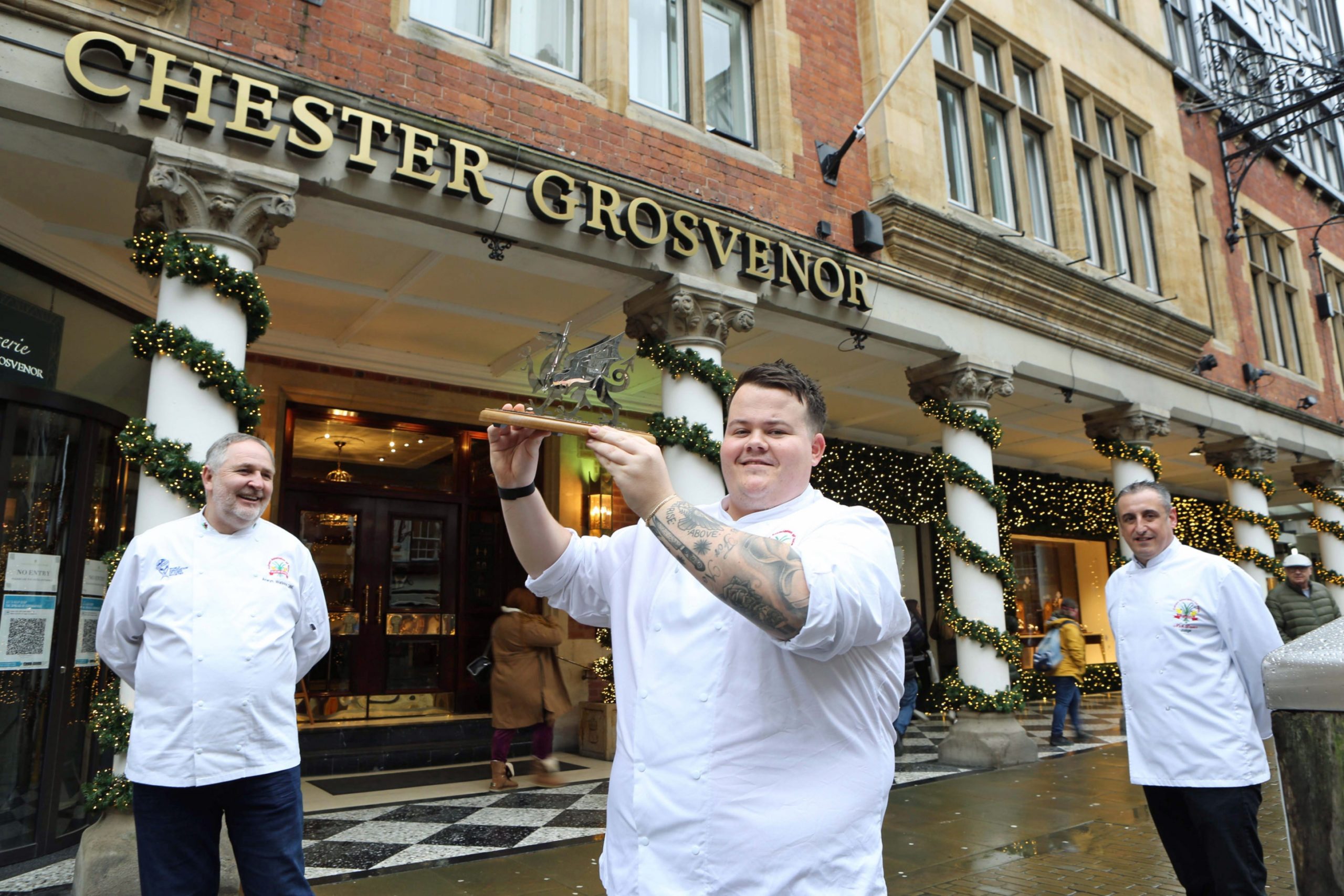 It was second time lucky for a Welsh chef who works at the famous Chester Grosvenor hotel, as he secured the National Chef of Wales title.

Having finished third in the final of prestigious competition last year, he was delighted to receive the news which was broken live on the CAW’s Facebook channel.

“A lot of hard work and organisation went into this competition and it’s amazing to win the national award for the country where I grew up and love,” said Sam, who is originally from Gobowen, near Oswestry and now lives in Chester.

“When you get such positive feedback from the judges, it’s such a great feeling. I tried to keep my dishes simple and big on flavour, using the ingredients at their best and not trying to over-complicate things.

“Welsh ingredients are so special that you don’t need to do much to them apart from show them a little love.”

As for the future, Sam is getting married next May and wants to continue his learning journey at the Chester Grosvenor, where he has worked for five years. “I just want to carry on learning and getting better every day, but I would like to open my own small restaurant sometime in the future,” he added.

His prize for winning was £1,000, an engraved set of cook’s knives made by Friedr Dick and £250 worth of personally selected tableware products from Churchill. He will also represent Wales in the Worldchefs Global Chefs Challenge.

The contest final should have been held at Cardiff and Vale College City Campus, Cardiff on March 30, but had to be postponed due to the Covid-19 pandemic. However, the innovative CAW resurrected the final in a different form.

Instead of bringing all the finalists together at a venue, it was decided to send judges to the establishments where the chefs work to watch them cook their three-course menus.

Only four of the original six finalists were able to compete as some establishments were closed due to the pandemic.

The chefs had to cook a starter suitable for vegans, a main course using two different cuts of Welsh Beef and a dessert including chocolate as the main ingredient.

Lead judge Nick Davies, Senior Culinary Team Wales manager and chef trainer in hospitality, food and drink at Cambrian Training, said: “Sam is going to be a star of the future and is a worthy winner.

“He demonstrated cutting edge skills and all his dishes had a theme and sensational flavours. He is at the right age, has learnt his trade in a great place and is definitely on the way up.”

Whilst organising both the Junior and National Chef of Wales competitions was a logistical challenge, as the finalists live in different tier areas of Wales and England for Covid-19 restrictions, Mr Watkins said it has been a “fantastic experience” for all involved.

“This new format has been a very positive experience, as it allows more chefs to be exposed to the competitions and gives host businesses the opportunity to showcase their talented chefs,” he added. “We had a really warm welcome from the businesses.

“The competitions can add real value to hospitality businesses, the supply chain and skills. They have brought a bright ray of light to the resilient hospitality industry at the end of its worst ever year.”

Organised by the CAW, the competition has Food and Drink Wales, the Welsh Assembly Government’s department representing the food and drink industry, as their main sponsor. Other sponsors include Hybu Cig Cymru – Meat Promotion Wales, Churchill and Friedr Dick Knives. National Chef of Wales winner Sam Griffiths celebrates with the trophy outside the Chester Grosvenor.