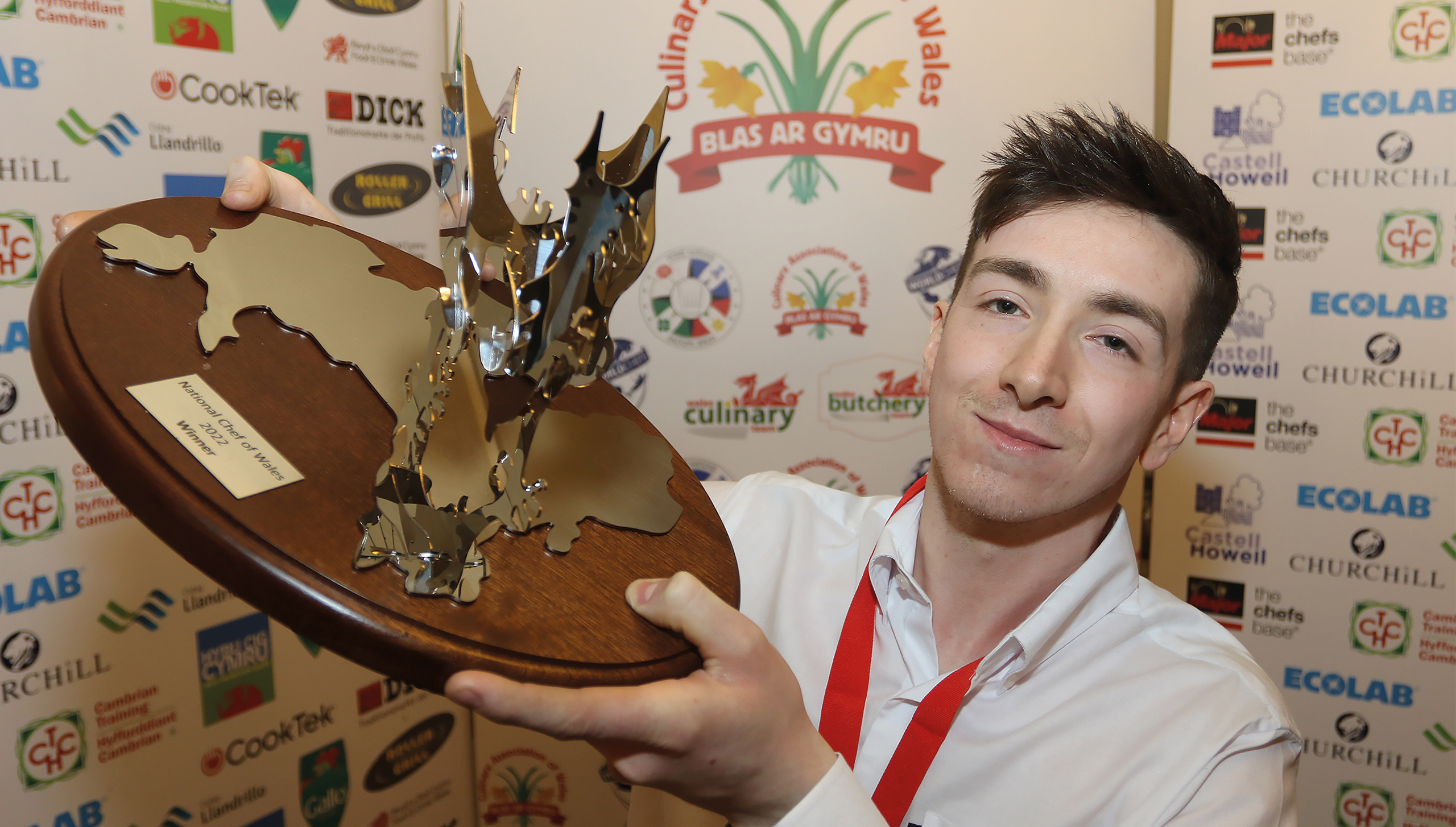 Talented Bridgend chef is the new National Chef of Wales

The new National Chef of Wales is Thomas Herbert from Bridgend who works who works at Lucknam Park Hotel & Spa, Chippenham.

He beat four rival chefs in a cook off to win the £1,000 prize and will now represent Wales at the next Worldchefs Global Chefs Challenge Northern Europe heat. He also received a set of knives from Friedr Dick and £250 worth of Churchill products.

Gold medallist Herbert is the third chef in six years from Lucknam Park Hotel & Spa, where Welsh chef Hywel Jones is the executive chef, to become the National Chef of Wales, following in the footsteps of Ben Taylor in 2016 and Thomas Westerland in 2018.

“I was very happy with my dishes but I honestly didn’t expect to win,” was Thomas’ first reaction to winning. “It means a lot to me because I am a proud Welshman and my dream is to eventually come back to Wales and open my own restaurant.

“I am the third chef from Lucknam Park Hotel & Spa to win the National Chef of Wales title which shows the Hywel Jones is putting his time into us and producing a great calibre of chef. I owe this win to him and also my commis chef Jamaar Semper who helped me in the final.”

Main sponsor of the WICC, organised by the Culinary Association of Wales (CAW), is Food and Drink Wales, the Welsh Government’s department representing the food and drink industry. The three-day championships were hosted by Grŵp Llandrillo Menai’s campus in Rhos-on-Sea

The finalists had five hours to prepare and cook their own four course menu for 12 people, featuring mostly Welsh ingredients. A vegan starter is followed by a fish dish, a main course using two different cuts of Welsh Lamb and a dessert featuring seasonal fruits, ice cream, chocolate and biscuit or tuille.

For the first time at the WICC, invited guests and sponsors had a chance to taste the finalists’ dishes.

Colin Gray, judging panel chairman, said: “Thomas’ dishes were exceptional, full of flavour using modern cooking and presentation techniques which is what we are looking for. It’s a good example of how fine cuisine has developed and come of age.

“For someone so young to be competing and winning against more experienced chefs is very impressive.”

Herbert cooked a vegan baked potato gnocchi with cep and Welsh truffle and a starter of Anglesey sea bass with lavabread and cucumber. Main course was a duo of Welsh Lamb with spiced carrot and yoghurt and his menu was completed by chocolate cremeux with pear.