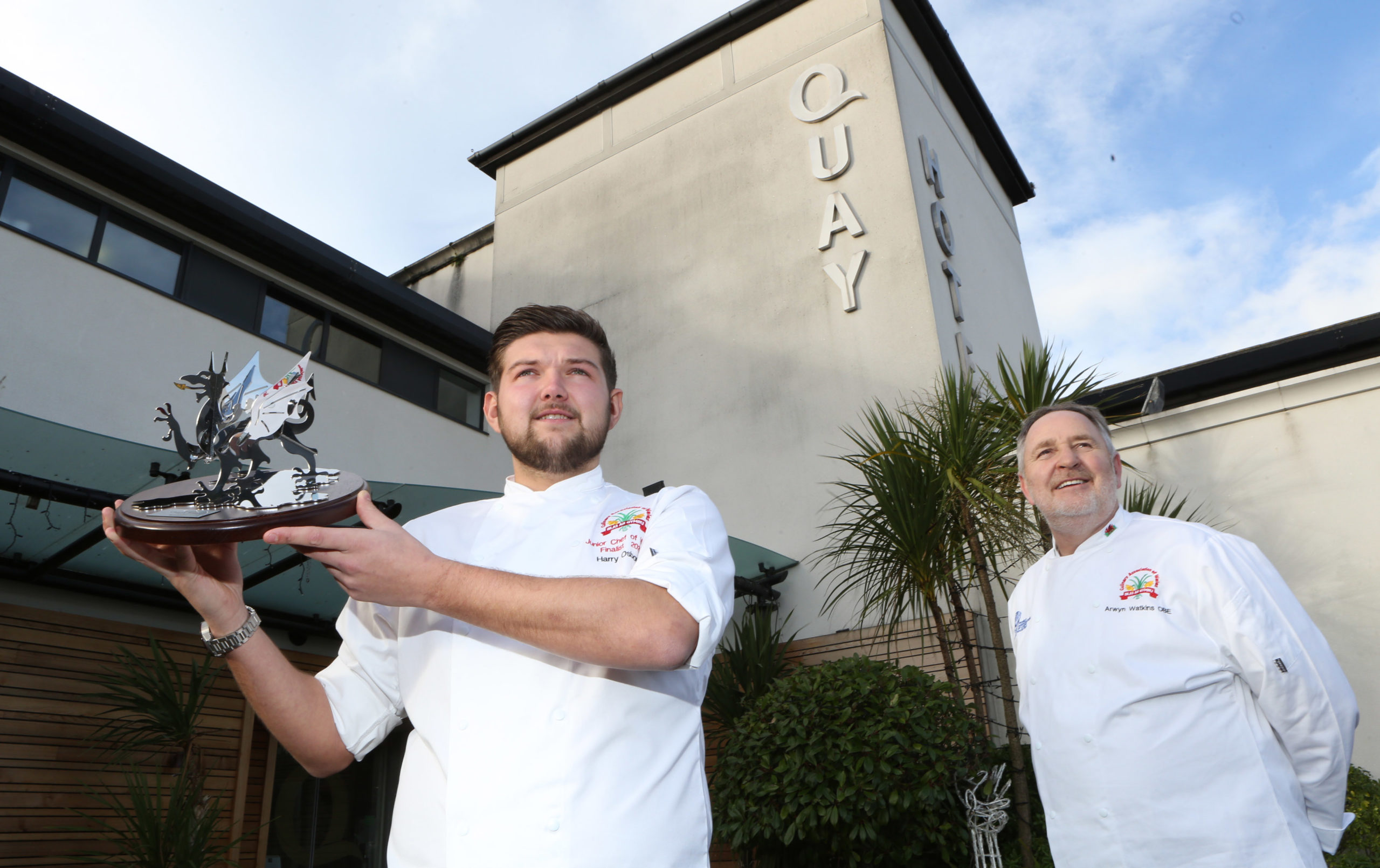 A talented, young chef who works at The Quay Hotel and Spa, Deganwy, Conwy has been judged the best in Wales.

Harry Osborne, 22-year-old junior sous chef, received a surprise visit today (Tuesday) from Arwyn Watkins, Culinary Association of Wales (CAW) president, who announced live on the CAW’s Facebook page that he was the new Junior Chef of Wales and presented him with the trophy

The contest final, which was due to have been held at Cardiff and Vale College City Campus, Cardiff on March 30, had to be postponed due to the Covid-19 pandemic.

However, the CAW resurrected the final in a different form. Instead of bringing all the finalists together at a venue, it was decided to send judges to the establishments where the chefs work to watch them cook three course menus in their own kitchens.

Only three of the original seven finalists were able to compete as some establishments were closed due to the pandemic. Competing against Harry were previous finalists Thomas Martin, Baileys Arms, Mountain Ash and Oliver Thompson, Gaerwen Arms, Gaerwen, Anglesey.

As part of his winning prize, Harry will be seeded through to the semi-finals of next year’s Young National Chef of the Year contest organised by the Craft Guild of Chefs. He also received a set of engraved Friedr Dick Knives and Churchill tableware worth £100.

“I was gobsmacked when told I had won,” said Harry, who was third in the competition three years ago. “It means the world to me because it’s a really big competition and great to put on my CV.

“I want to go as far I can in my career. After gaining more experience, I would like to work in London and eventually buy my own restaurant. I love trying different things with my dishes and like to shock people.”

Lead judge Danny Burke, coach to the Junior Culinary Team Wales and director of Olive Tree Catering, Runcorn, praised Harry’s excellent menu, good knowledge of the products he had used and the professional way he had worked.

“The competition is not just about the food on the plate,” he said. “We watch the chefs from the moment they walk into the kitchen, how they set up and how they work under pressure.

“Harry worked very hard but was always in control of what he was doing, and he has an excellent mentor in head chef Ian Watson at The Quay Hotel and Spa.”

Mr Watkins said organising both the Junior and National Chef of Wales competitions had been a logistical challenge as the finalists were located in different tier areas of Wales and England for Covid-19 restrictions.

“It has been a brilliant experience to engage with the chefs and host businesses and has brought a bright ray of light to the hospitality industry at the end of its worst ever year.

“I thank all the finalists and judges for their dedication and the establishments for opening their kitchens for their chefs to compete. The competitions have definitely demonstrated the Welsh talent working in the resilient hospitality industry.”

Organised by the CAW, the competition has Food and Drink Wales, the Welsh Assembly Government’s department representing the food and drink industry, as its main sponsor. Other sponsors include Hybu Cig Cymru – Meat Promotion Wales, Churchill and Friedr Dick Knives.