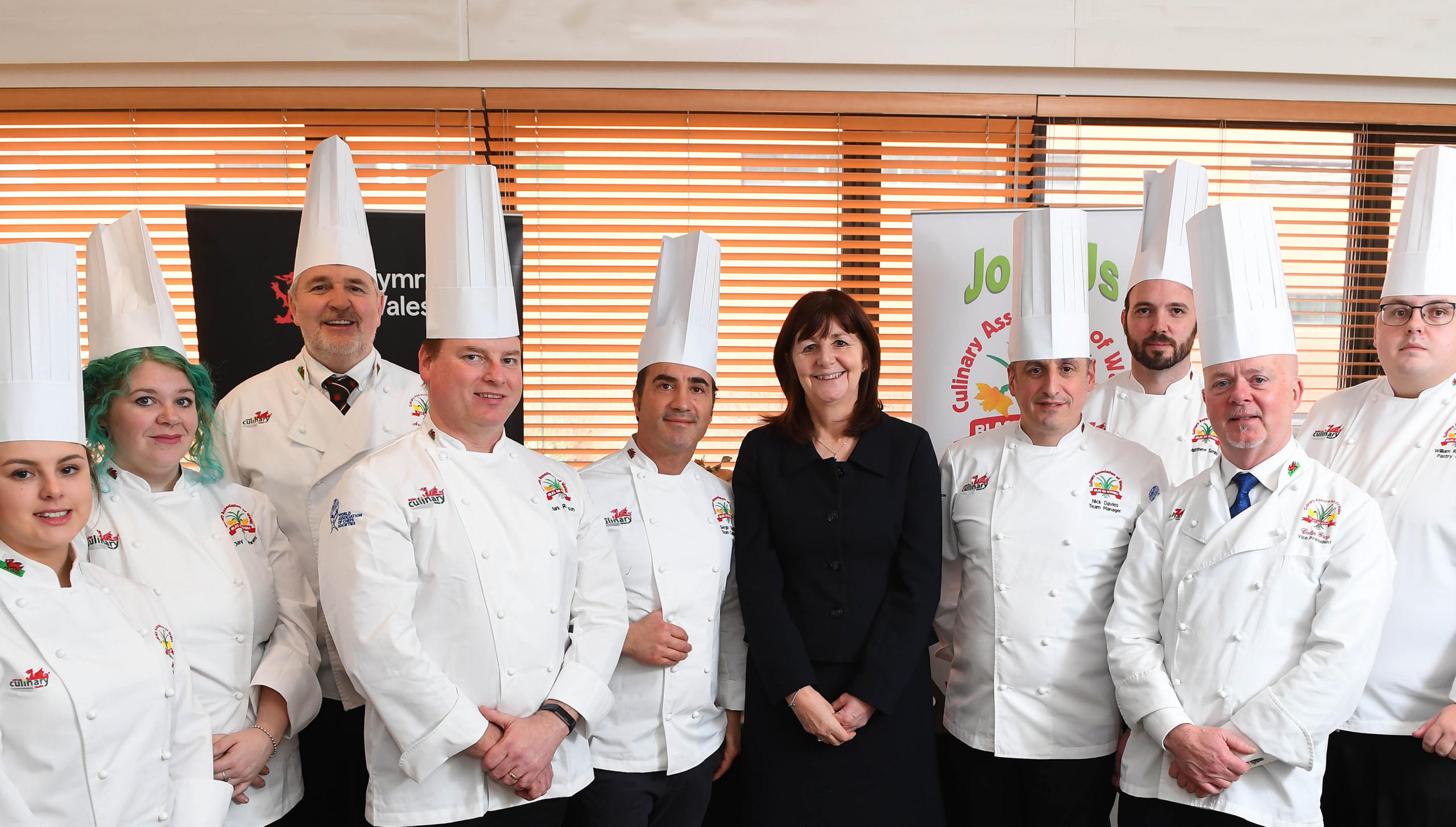 Senedd send off for Welsh chefs heading to the Culinary Olympics

Senior and junior chefs who will be cooking for Wales at the prestigious IKA Culinary Olympics in Germany next month were given an enthusiastic send off by Assembly Members today (Wednesday).

Minister for Environment, Energy and Rural Affairs Lesley Griffiths, AM, hosted a reception at the Senedd in Cardiff this morning to pass on the nation’s best wishes to the chefs who will be competing against the world’s best in Stuttgart from February 14-19.

The Culinary Association of Wales (CAW) is sending senior and junior teams to Germany where they will join around 2,000 chefs and pastry chefs from more than 60 nations at the biggest and oldest international culinary art exhibition.

Both are new teams, with the majority of chefs making their international debut.  Junior members are aged between 19 and 21 years, while the senior team is managed by Nick Davies, an experienced chef who will be competing at his fifth Culinary Olympics.

The IKA Culinary Olympics will also provide an important platform for Wales to lobby support from national culinary associations worldwide as it bids to host the Worldchefs Congress and Expo at ICC Wales, Newport in 2024.

Wales has been shortlisted with Singapore, Poland and the Netherlands to host the Worldchefs Congress, which is expected to attract 1,000 chefs from around the globe. Its associated Expo exhibition attracts between 5,000 and 10,000 visitors.

The winning host country will be announced following a vote at this year’s Worldchefs Congress in St Petersburg, Russia from July 29 to August 1.

Minister Lesley Griffiths said: “I was delighted to host this Senedd send-off event and give fellow AMs the chance to join me in wishing our two teams of highly skilled chefs the very best of luck during the prestigious IKA Culinary Olympics.  I am sure the judges can’t fail to be wowed by the culinary talents of both our junior and senior teams.

“This event also provides the perfect platform to attract the support of national culinary associations as we bid to bring the Worldchefs Congress and Expo to Wales in 2024.

“We are really gaining a reputation as a food and drink nation – as proven by the recent figures which show last year, we smashed our ambitious industry target of achieving £7 billion turnover.  Winning the bid to host such a high-profile event in Wales would provide a further boost for our thriving food and drink industry.”

CAW president Arwyn Watkins, OBE, said: “It’s a huge accolade for the Culinary Association of Wales to be invited by the Minister to give the two teams a Senedd send-off to the Culinary Olympics. It’s also an opportunity to highlight all the good work done by our members as real ambassadors for Wales on the international stage.

“2020 is going to be a very important year for the association and for Wales as we bid jointly with ICC Wales to host the Worldchefs Congress and Expo in 2024. I shall be spending the majority of my time at the Culinary Olympics lobbying fellow presidents of Worldchefs member countries to vote for Wales.”

Davies, culinary craft trainer with Cambrian Training, Welshpool, will combine the roles of manager and member of Senior Culinary Team Wales, which is captained for the first time by Sergio Cinotti from the award-winning Gemelli and Gem42 Restaurants, Newport.

Both teams will cook a three-course menu in the Restaurant of Nations element of the competition and then produce a range of dishes for a chef’s edible buffet, newly introduced this year.